My friend Liz’s expression was an incredulous leer as her sports car screeched to a halt in the South London traffic.

‘You’re going on The Walk?  What do the wives and girlfriends think about that?’  No preliminaries then, no sly references or allusions, but quick, brutal, to the point.

‘I don’t think it’s a problem,’ I asserted, mortified by the angry glares as cars steered around us, and pleading with my eyes that she should move on.  But Liz is not one to be rushed or intimidated, especially when she is awaiting an explanation.  I had better elaborate, and quick.

Yes, I was going on The Walk, an institution of some years standing begun by friends of mine that I had thus far felt excluded from largely due to its beginnings coinciding with the birth of my daughter.  Oh, that and the fact that it was an all-male party.  I had not paid much attention at the time of its inception, being otherwise preoccupied with the more pressing requirements of new life, breast-feeding and nappies, but suspected its roots lay in male-bonding and escape.  Yet as the years passed, and the legends abounded, my curiosity grew in corresponding alignment with my own desire to break free.  What was this ‘Walk’ (capital ‘W’) thing?

Slowly a picture emerged: A twice-yearly long-distance trek; a five-day break from cares and worries to pursue the ancient pastime of rambling.  All very innocent-sounding.  But there were other stories: tales of reckless mayhem and equally reckless alcohol consumption.  Injury, illness, and near death experiences were all to be expected.  Part of the challenge appeared to lie in a wilful abandonment of anything resembling a considered plan.  ‘Getting lost’, although not officially a deliberate intention, was neither a cause for much concern.  Indeed it seemed imperative to give each trip a hefty scope for calamity for the sole purpose of later amusement and anecdote. But most of all, I was told, it was hard.

But let’s backtrack.  The first symptom of my restless dissatisfaction was perhaps the bike.  I was working from home doing a job I hated and watching as my young daughter grew wild-haired and feral whilst I regularly hiss-screeched at her:

‘Sssshhhhh, Mummy has to make a very important telephone call!’

And I didn’t feel I was getting anything out of the experience except stress, so when I saw the bike, I knew in a moment of wide-eyed lunacy that I had to have it.  It was a beautiful Schwinn beach cruiser and I bought it on the spot. That’s right, a beach bike in South London.  Friends sniggered over their high-street lattes at the sight of me riding bolt-upright in the fabulously well-sprung saddle through the town centre.  As crises go, I may as well have been wearing purple hotpants and a tinted visor.  Looking back, it is the only thing remaining that I ever gained from that grim employ, but at the time was clearly indicative of my impending madness.  It was while out and about on my bike that I realised with no small degree of panic how adventure had left my life. Bad timing meant there was a large age gap between my two children; a lengthy and impoverished domesticity had ensued, and now I recalled with dismay how long it had been since I had climbed a mountain.  And it was while I free-wheeled along under a cerulean sky that the idea to go on the Walk had come to me.  But I had tucked it away, secretively.  When it was announced that the next Walk was to be in Cornwall, I was resolved.  I had not been to the county for many years and yet, out of pure love, romanticism and downright foolhardiness, had decided to set the novel I was writing there.  The excuse of ‘research’ was all the persuasion I needed.  I called Andy, perhaps my oldest friend in the group and asked him outright if I could come.

Of course I could. 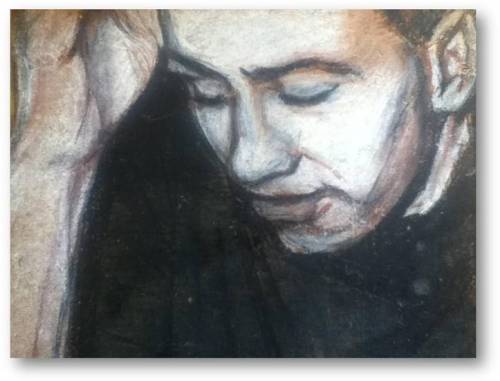 It was that easy.  If Andy had had any reservations he hid them with aplomb.  He explained how it was open to all, indeed wives and girlfriends had been before, but usually just for a day, and mostly, tellingly, never to return.  But this was the difference: I was not a partner, an ‘other-half’, and as such was the source of Liz’s entertainment.  Liz’s idea of a holiday was a month on a beach in Florida with a stack of paperbacks, so the idea that anyone would choose to go hiking with a bunch of men was instantly suspect in her eyes.  And well, yes, okay, I had dated a couple of the guys before but that was way back in another lifetime.  And I may have harboured a tiny crush on one or two of the others at times…  But no; these were my buddies, my mates.  They were the boys of my youth that I had gone to gigs with, stood around charcoal burners in donkey jackets on picket lines with, hung out in corners at parties trying to look moody and interesting with.  We had argued, fallen out, and at times lost touch.  We had shared flats, and shared problems.  But most of all there had been fun, laughter and good times.  And I knew and was friendly with all of their partners, so despite Liz managing to raise a small blush to my cheek, I was not about to rise to insinuation. I was no Jezebel.  No, the desire to escape had been strong, and if I’d had any small doubt that my motives might cause suspicion, it had been quietly repressed.

And how hard could it be?

I have always been attracted to roaming; a vagabond heart that always wanted to see the view from the top of the hill, or find out what lay at the end of that eerie tunnel of trees, or beyond that rusting iron gate.  But back-packing around youth-hostels as a teenager I most certainly did not associate myself with the middle-aged ‘rambler’ types you would see lining a distant hill-top with their funny trousers, hats and sticks. Oh no… I was an adventurer; I had climbed Ben Nevis, and Snowdon.  I had traipsed around the Greek Islands for long months, sleeping under the stars and with nothing in the world but what I carried in an old army rucksack on my back.  And they thought they could scare me?  Hah!

Phone calls were made, and I was guided through the dark streets of Old London Town to an ancient gin-palace of a pub for a pre-walk meet. Ostensibly this was a chance to reacquaint and do some serious Enid Blyton-style map-poring; in reality, an ill-disguised test of my drinking prowess; a limber-up if you will, and an opportunity to test my mettle with yet more fearsome tales. By candlelight in a hobbit-hole corner at an old wooden table, I listened and nodded, sensing that with barely a toe in the door, this was not the time to ridicule.  Yet inwardly I scoffed; they were making it up, the bunch of Jessies.  I didn’t drive a car and walked everywhere as it was, and surely it was just a question of putting one foot in front of the other?  Hard, indeed!  I’d climbed Ben Nevis!  – And Snowdon.

A rehearsal run was arranged for the following weekend on Box Hill, a popular Surrey area of wood and chalk downland, and it was deemed imperative that I get me to a hiking shop for some essential kit.  Much attention was given over to my basic equipment, and most importantly, my footwear.  It was all about the socks and boots apparently.  But mostly the socks.  In case this had not been made perfectly clear on the night, it was followed up by an emotional telephone call the following day from Kev, barely disguising his shrill panic as he emphasized ‘Bridgedale!  They must be Bridgedale!’  I reassured him that his own ghastly experience of the wrong socks had not fallen on deaf ears and that the suffering would not have been in vain.  I don’t like to see a grown man cry.

Liz helpfully (some might say salaciously) offered to lend me her pink Timberland boots ‘to match my knickers’.  Naturally I loftily declined…

My bike.  (And yes, well spotted, it’s a man’s bike.  Such was the impulse I could not wait for them to order a woman’s model, which incidentally also cost almost a third more!)

OFF THE BEATEN TRACK